Links to the fics here, if you've read the intro and just want to get to the stories!

Anyone who reads my Blog will know that the first time I saw Matrix: Reloaded and Matrix: Revolutions I was disappointed. I'd expected a lot more of and from them (and certainly not such an unlikely love story...)
And I was disgusted that anyone would come up with characters as fascinating and visually stunning as the Twins and get rid of them half way through the film after - what? Eight? Ten? minutes of screen time. Ye gods, even I don't do that!
It goes without saying the ideas started bubbling almost as soon as the film had ended...

Beautiful Day, the first story, takes place some considerable time before Reloaded, its title comes from the U2 song of the same name - a long term favourite of mine, the lyrics are at the bottom of the story - and originally it was going to be a songfic slash.
Well, sort of.
Well, not really. I'd promised myself, after finishing Timeslipping (no, that story isn't posted on the site. Only three people in the world have a copy of it) that I'd pay attention to my growing uneasiness about the ethics of slashing 'real' people and stop writing it (though not necessarily reading it). That was several years ago, and while I'm perfectly happy to write yaoi (no 'real' people there), I've kept my promise.
Until now.
Possibly.
Although I don't actually think these stories are slash (goes without saying really, since they're here instead of in The Zone), especially given the nature of the Twins. Well, the way I've written them, anyway.
You might think differently. That's your prerogative. Just be aware that these stories contain adult material. And please read them in the right order, starting with Beautiful Day: they're becoming a series.

I suppose I ought to state here that unfortunately I don't own the Twins - they're the property of the Wachowski brothers: if I did own them they'd have had an awful lot more screen time. And possibly their own spin-off film(s)... TV series... manga.... not to mention the other things I can think of doing with them... Where was I? Oh yes...


Beautiful Day was a real challenge, and I enjoyed every hour of it - although I haven't managed the illustrations I had planned (brain could see what I wanted to draw: fingers just wouldn't cooperate. Maybe later...). The second fic, Separate, and then Together, the third fic, followed almost as a matter of course. I was supposed to be working on other projects, but they just demanded to be written and wouldn't let me concentrate on anything else until they were done.

The Twins are just so, so compelling... 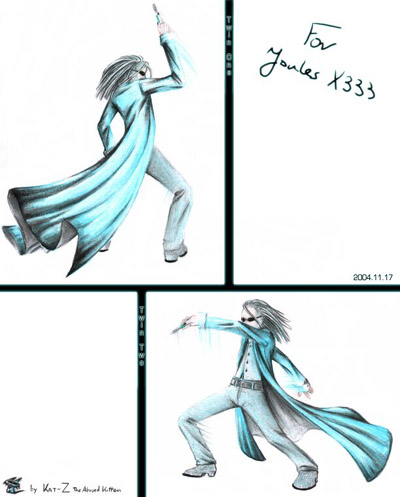 A gift for me from Kat-Z!

Brief note about style: I've done my usual and coded a variety of font faces/colours/sizes into the story. You'll get the best effect if you have the Alternity and/or Braggadocio fonts installed on your machine.

Back to the Wavewrights' Showcase

Back to the Vault

The Zone is where you'll find all the adult stories, slash and yaoi lemon fics (Matrix Twins, LotR, Harry Potter, Chronicles of Riddick etc) in their own password-protected directory. You'll need to email me with your choice of ID and password in order to gain access. Please don't use underscores, spaces or any unusual characters, I've discovered that my login software won't accept them! Those who aren't already members of the Zone or the Darkside will also need to provide an age statement: due to the nature of the stories you must be over 18 or whatever is the legal age in your country. I reserve the right to refuse access if I consider it appropriate. If you don't know what slash lemons are, you won't enjoy the stories here, so please don't bother applying.
Once you have a password and ID, access The Zone from the WaveWrights Showcase page, in The Vault section.